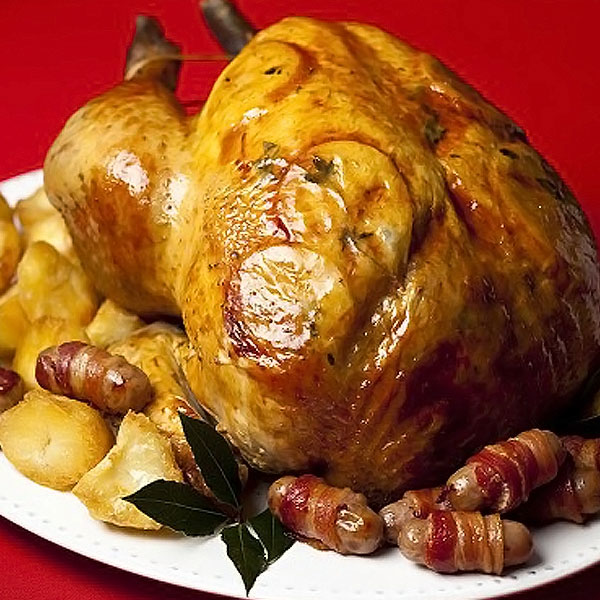 I use a meat thermometer when cooking this as it helps to judge when the turkey is done. Cook it to an internal temperature of 75C-80C rather than the 90C suggested on the thermometer gauge, though. When working out when to put the turkey in the oven, allow at least 30 minutes’ resting time. If you have chosen to cook a turkey of a different size to below, see Turkey timings below (there is no need to include the weight of the stuffing).

REMINDER - Do not put a meat stuffing into the cavity of a bird as this is not safe. In the cavity use only flavouring vegetables and herbs.

PREPARING AHEAD - Prepare up to the end of stage 3 up to 12 hours in advance. Cover and chill until ready to cook. The stuffing can of course be made up to a month in advance and frozen.

TURKEY ROASTING TIMES - If cooking a turkey weighing more or less than the master recipe, follow the times given here. The table below shows times for gas and electric ovens. Ovens do vary considerably, so if you know that yours is on the hot side or the cool side, adjust the times accordingly. Aga cooking times are shown underneath.

AGA FAST ROASTING - After stage 3 of the master recipe, cook in the roasting tin lightly covered with foil on the grid shelf on the floor of the roasting oven for the following times. Baste the bird from time to time and remove the foil 30 minutes before the end of cooking time to crisp the skin. For a 3.5kg-5kg (8lb-11lb) turkey allow 1¾-2¼ hours total. For a 5.4kg-6.3kg (12lb-14lb) turkey allow about 2½ hours. For a 6.75kg-9kg (15lb-20lb) turkey allow about 3 hours.

This recipe is taken from: Christmas Collection (Headline)